My Spartan journey began in March of 2012 at The Gusher 5K. (You guys may remember Iram Leon who won The Gusher Marathon earlier this year & is also a recent Spartan finisher.) Having never run more than a mile in my life – if that – I signed up to run my first 5K at The Gusher since our office had a participating team. As it tends to do, life got in the way & I never prepared for the run. And, as luck would have it, a team member from our office ended up having to back out at the last minute leaving an open spot on the team. Genuinely thinking of backing out myself, I convinced my husband to join our team as a walker. Having had back surgery 3 months prior, I knew I was asking a lot of him, but I also knew it would be my “easy way out.” He would start the race running – that’s the stubborn man he is – but, I was convinced there was no way he would run the entire 5K. Which, of course, meant I’d “have” to walk the rest of it with him to show my support. *cough, cough*

Race day came and I was petrified. As we took off among the horde of people and my legs began to hurt almost instantly, it became clear there was no way I was finishing that race running. With only a ½ mile down, I looked over at my husband who was calmly running along and looked for some sign of him slowing down. Zero chance. (Must have been all those years in the Army paying off.) So, I continued to plod along trying to decide if I could somehow fake an injury. As we approached the 1 mile marker, I began to tell myself I just had to make it to the mile marker and then I could walk. (After all, that in itself was an accomplishment for me.) The mile marker came and went. My husband continued to run. Oh how I hated (and adored) that man. So we ran. And ran. And ran. As I crossed the finish line for my very first 5K, I felt like I had just run a marathon – mentally and physically. I was ecstatic! It was in that moment that a thought crossed my mind, “What if.” I hadn’t prepared and yet, I had finished my task. What if I had actually trained? What if I could really do this?

My husband, Ryan, & I after our first Spartan in Burnet, TX.

Fast forward 2 months and I found myself standing at the starting line of my first Spartan – the Sprint in Burnet, TX. Once again, I felt like I had made a very bad decision agreeing to endure such torture. The race started and I trudged along the course. My husband was with me every step of the way helping me over the walls, talking me through the running. I managed to only have to do burpees twice – the rope climb and the spear throw. Covered in mud from head to toe and completely exhausted, we crossed the finish line. As they placed a Spartan medal around my neck, I decided I could most definitely do this.

My husband and I agreed we wanted to go after the coveted Trifecta medal. We began to train and prepare by participating in as many races, bike rides and runs as we could. We even completed our first Tough Mudder and joined a local CrossFit box (shout-out to CrossFit Bridge City). We often joked that these races and training were our marriage counseling. (How true that turned out to be!)

We completed our 2nd Spartan – the Beast – in Glen Rose, TX that December. The day after returning home, I began to experience severe chest pain. Within a week, I found myself hospitalized and diagnosed with two pulmonary embolisms, commonly known as PEs – or blood clots in the lungs. The remedy? Blood thinners for a minimum of 6 months with the possibility of being on them permanently if they determined I had a blood clotting disorder.

Ryan & I jumping the fire to finish the Spartan Beast in Glen Rose, TX together.

As I lay in my hospital bed, the doctor tried to reiterate how much of a “big deal” my situation was. (Not being familiar with PEs, I didn’t grasp why they were acting like I was dying.) All the doctors and nurses seemed to say was, “It’s a really big deal.” Finally, the doctor decided to shoot straight with me. With a sincere look of concern on his face, he said, “You had two chronic PEs. One in the right that was completely blocking the artery and the left almost completely blocking the artery. We’re lucky we caught it. That’s usually fatal.” Later that afternoon, they sent in the hospital chaplain to discuss my will. (Let me just say from experience that nothing quite brings your life into perspective like the words fatal and will.)

These people are crazy! I am SO not dying today – I found myself screaming inside. What about my children? My husband? What about everything I haven’t gotten to do yet? “Can I still do obstacle racing?” I asked. With a look of surprise on his face, the doctor replied, “Well, I wouldn’t go climbing through barbed wire or anything.” Uncontrollably, the tears flowed. The idea of waiting my entire life to finally discover I loved something only to have it ripped away was devastating. Maybe I was dying. My husband stayed by my side, reassuring me that we would get through this together. And, get through it we did.

With only a month off from CrossFit and adjusting to life on my trusty blood thinners, I returned to the local box and began to push harder than before. In the beginning, every time I struggled to breathe, I experienced anxiety. In time, I began to distinguish the difference between the PEs causing me problems and me just getting my butt kicked by the WOD. But, with overwhelming support from my fellow CrossFitters and my husband and with my children as inspiration, I began to set personal records. Every day I grew stronger and more fit. Every day I got one day closer to that 6 month mark of required blood thinners. 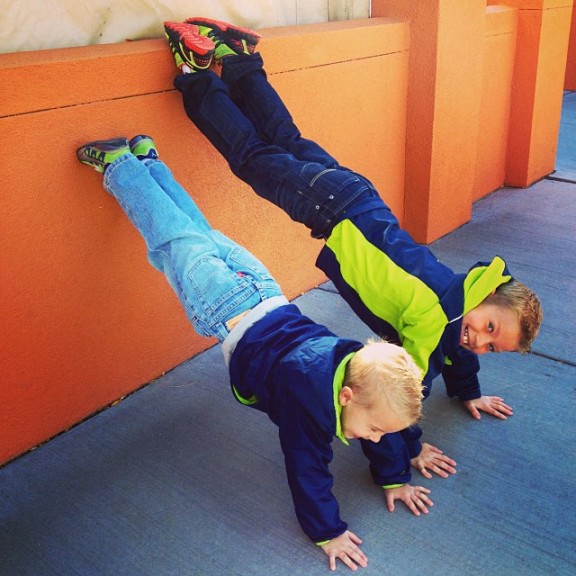 Some days, reality liked to slap me a little harder than others. Like the morning I received a text from my co-worker telling me her sister’s husband died from a PE and that I’m “the only person she knows who’s survived it.” Or when we got the call that my husband’s great uncle had passed away from a PE. No one knows why God does things the way He does, or what His plan is for us. All I know, is that it wasn’t my time to die. For the time being, I still get to wake up next my husband and kiss my children goodnight. And for that, I am very grateful.

What feels like a million vials of blood later, we still don’t have an answer. The doctors have a few leads, but nothing solid. For now, I’m free of Coumadin and clear to conquer what I set out to do over a year ago – get the Spartan Trifecta medal. My husband and I are signed up for the Spartan Sprint in Kiln, MS. I have no doubt that when I find myself standing at the starting line, I’ll experience fear and anxiety. But I also know one thing for certain. I will finish the race. I will add another Spartan medal to my collection. And one day very soon, that will be the Trifecta medal.